Ulcers can be very painful and shouldn’t be ignored. An ulcer can eat into the stomach wall causing a perforated ulcer or the blood vessels causing a bleeding ulcer, resulting in damaging and excruciating health complications.

If your elderly parent is wondering if he has an ulcer or if it’s something else, here are the top symptoms of most peptic ulcers. 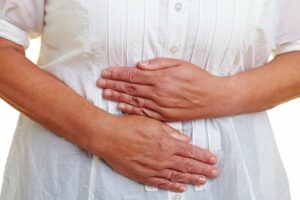 Stomach Pain. If your parent is feeling pain between his belly button and his breastbone after meals, it might not be heartburn. It could be an ulcer. Ulcer pain often comes and goes in waves and creates a stabbing pain. If you or your home care provider has given your parent some antiacids and it’s not helping, it might be an ulcer acting up.

Excessive burping or hiccupping after eating. Your parent hasn’t just misplaced his manners, it might instead be that his ulcer is creating excessive indigestion. Ulcers often make a person very gassy.
Nausea. Waking up feeling nauseous is common with ulcers. The imbalance of digestive juices can make your parent feel especially queasy in the morning.

A Heavy Stomach. Ulcers can make the abdomen feel heavy or full, making it uncomfortable. If your parent complains to you or your home care provider that his slacks are no longer fitting well, this could be the reason.

Flu-like Symptoms. Ulcers can also cause symptoms that look like the flu. Some common symptoms include fatigue, malaise, a fever, and nausea.

Loss of Appetite. An ulcer can cause your parent to turn down meals or snacks more than he used to. The sudden and sharp pains that follow a meal may make your parent not want to eat again for fear of feeling those pains again. If he is refusing meals, ask him why he doesn’t want to eat to see if the reason is fear of the pain that will follow.

“Hunger” Pains. Some people who suffer from ulcers feel like they’re having hunger pains within a couple of hours of eating. They are actual hunger pains, but rather ulcer pains caused by increased digestive juices.

Sudden Weight Loss. If your parent has lost a lot of weight lately, it might be caused by the lack of eating due to his ulcer. If the ulcer is also causing vomiting, that could be another reason for the weight loss.

Vomiting up blood. Unfortunately, vomiting is common with an ulcer because of the high levels of digestive juices sloshing around in the intestines and stomach. However, if your parent vomits up traces of blood, his ulcer is advanced and needs attention immediately.

Discolored Stool. Your parent may notice his bowel movements are darker or even carry tinges of blood if his ulcer is advanced.

If you or your home care provider suspect your parent has an ulcer, he should visit his doctor for a full check-up so you can determine the exact cause and start treatment to bring relief as soon as possible.

If you or a family member need to hire Home Care Services in Huntington NY or the surrounding areas, contact the caring professionals at Star Multi Care Services today at (631)956-8835. We are the Right Choice for Home Health Care Services!