Every September 29th, the nation celebrates the artistry that goes into silent movies (films that contained no dialogue and relied on the actors’ facial expressions, movements, and scenery to tell the story). You’ve been looking for a fun way to spend time with your dad. Gather the family, bring your dad’s favorite foods, and have a silent movie day. If your dad is getting help from elder care providers invite them along. 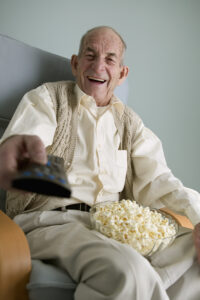 The oldest surviving silent movie was very short and dates back to 1888. Sadly, four out of five silent movies made in that era no longer exist due to deterioration. Preserving them is difficult without re-recording the scores, which is one reason many silent films no longer exist. From those that are available, these are some of the best silent movies to watch together.

Charlie Chaplin is one of the first actors to come to mind when thinking about silent films. In City Lights, he plays “The Tramp” and meets and falls in love with a blind girl. His story continues in Modern Times, where he’s having to learn to adjust to the world’s changes after the Great Depression.

Buster Keaton is a big name in silent films, and he’s the star in The General. He plays a man who must rescue the love of his life and his favorite train from spies. It’s set during the Civil War and is packed with action.

This isn’t the horror film you’re thinking of. Clara Bow is an It Girl who works in retail and falls in love with her boss. Only like any romantic comedy, there are obvious hurdles keeping her from landing her Mr. Right, but she’ll do what it takes to win him over.

Going back to Charlie Chaplin’s Tramp character, The Kid is a good introduction. He plays a man who comes across an infant in a stolen car and takes the boy into his care. Years later, the infant is now five and government agencies are trying to separate the pair.

Long before the hit Andrew Lloyd Webber musical, The Phantom of the Opera was a silent film starring Lon Chaney. The Phantom hides within the Paris Opera House determined to turn a young singer into a star, removing any obstacles that get in the way of his plans.

Who Helps Your Dad When You’re All Busy?

What about the rest of the year? Who is there to help your dad and provide the socialization he needs to stay mentally and physically healthy?

Arrange elder care services when no one is available to spend time with your dad. He shouldn’t have to be alone and struggle to complete daily tasks while people are at work or live too far away. Elder care aides help him with daily chores and keep him company. Call our elder care advisor to learn more.

If you or a family member need to hire Elder Care Services in Plainview NY or the surrounding areas, contact the caring professionals at Star Multi Care Services today at (631)956-8835. We are the Right Choice for Home Health Care Services!